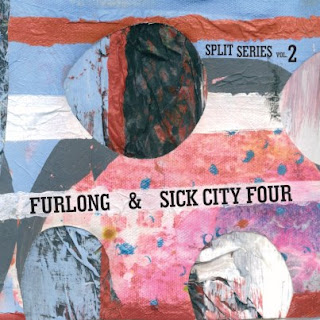 So, I'm old enough that 7"s were the way you bought your music, or at least if you were an AM radio kid that's how you did it.  Now, of course, 7"s are a little more esoteric.  This little nugget is the second edition of Gubbey Records' split series: the series places Gubbey chief Dave Rucinski's Furlong on Side A, with a special guest on Side B.  The first edition featured dark troubadour Anderson on Side B (with a solo version of Sean Garrison's "White Flag") along with Furlong's "Egg McMan" on Side A (also including a very nice cover of Leadbelly's "They Hung Him on the Cross" as a special bonus).  The latest edition takes an altogether different tack, pairing Furlong with Louisville improv/NRG jazz monsters Sick City Four.

Furlong rips into the proceedings with "Sex Bunker", a stoner metal sprint that plays a bit like a Saint Vitus LP on 45 rpm.  There's only one thing to ask from this, really . . . ROCK! . . . and, rock it does.  But that's not all . . . the more you listen to Furlong in general, the more you notice the little things, and not just the little production-type details that make a "professional" sounding record: sure, Furlong stacks up the guitar tracks, but they stack up the ideas, too.  So, you get the stoner metal lunge at the core of "Sex Bunker", but you also  get the punk velocity, nods to shit as diverse as Edgar Winter, Spinal Tap, Seattle sludge, the Stooges, and a whole bunch more sunk so deep into ideological mix as to be mere texture.  Perusal of the bonus track on the digital download, "Hoarder Fire", leads you down the same road by a different path: Zeppelin by way of Stone Temple Pilots, with the nervy guitar(s) tweaked into a psychotic benzedrine edge instead of STP's insipid junkie redolence.  Taking Zeppelin bombast and translating it into punk rock is no simple task, and Furlong nails it here.

This is, no question, a tricky path to walk down.  The only thing worse than pastiche is rock pastiche.  But Furlong never falls into that hole: everything here serves the purpose, and that purpose is . . . ROCK.  Having said that, Rucinski does manage a lot of mileage out of a deceptively simple surface.  Three songs is an extremely limited sample size; but is he (as Dan Willems has implied) transforming into a punk rock Brian Wilson?

Side B roars to life with the bellowing growl of Dan Willems's baritone sax (and that's a low B-flat baritone to you, bitches!), with the horns and guitar falling behind into a menacing cord, and Bart going apeshit on drums underneath.  Starting out very much like early 90's Ken Vandermark-era Flying Luttenbachers NRG jazz, "Burundi Punch Clock" establishes its head and quickly falls off the table as horns, drums and guitar slide all over each other briefly, only to tumble even further into a brilliantly abstract Chris Willems guitar break.  While the "solos" stack up in a way that roughly approximates jazz, this is less about musicians taking their turn, and more about each adding another piece to the jigsaw puzzle, for each part is inextricably linked . . . and, in spite of the amazing playing throughout, "Burundi Punch Clock" is about the links.

Essentially, the band forms four poles, and "Burundi Punch Clock" writhes in between.  Bart Galloway (drums) and Chris Willems (guitar) are the staccato jab, throwing accents and pulses all over the place (somewhat ironic, considering the traditional rhythmic role of both instruments in jazz).  While not specifically melodic (though very close), Bart's percussion lines alternate between small masterpieces of phrasing and spiky contrapuntal texture.  Falling into a dialogue with Bart's drums, Chris ups the ante by continually frustrating any expectations of melody and rhythm: you will always find Chris's guitar where you don't expect it, and when you're there with him, he hits you jaw dropping fragment and is gone again.

That leaves Dan Willems and Heather Floyd to define the other two poles.  Dan's baritone supplies the main riff of the head, as well as a lot of texture (not to mention a lot of the character of the song, given the singular sound of the baritone).  Dan's parts on this cut have a familiar "out" jazz sound to them (and he's as good on his horn as just about anybody you care to name), but his lines are pulled apart by the other polarities in play, making them more abstract and richer for their incompleteness/abstraction.  Heather, on the other hand, cuts across and through everything with her trumpet like a dry laser: the economy of her line organizes the chaos around her like metal shavings around a magnet.  Quite often, through the force of her playing, it is Heather who organizes/defines the Sick City Four.  Except, of course, when she chooses not to.

Antithetical to the ordered unfolding of jazz improv as well as to the fire-and-reload nature of most other free improv, "Burundi Punch Clock" is a small masterpiece of interlocked improvised parts that form a dramatic whole.  And the Sick City Four managed to squeeze all that onto a 7" record (!); usually their pieces are dramatically longer.  BUT WAIT, THERE'S MORE: buy this Furlong/Sick City Four single, and you get not only a slice of Furlong stoner punk heaven, not only a roiling Sick City Four miniature demon, not only a free download for a head-pounding Furlong bonus track, BUT ALSO SICK CITY FOUR'S "THE ANACREONTIC SONG" - AN INTERPRETATION OF THE STAR SPANGLED BANNER!  I'll leave that one to your imagination, at least until you buy the single.

NOW HOW MUCH WOULD YOU PAY?!

Furlong and the Sick City Four are joining Humongous for a double record release party at Astro Black/Quills Coffeehouse on Saturday, October 13th.  $3 gets you admission PLUS a free copy of the Furlong/Sick City Four 7"!