Sailing Away on a Sinking Boat 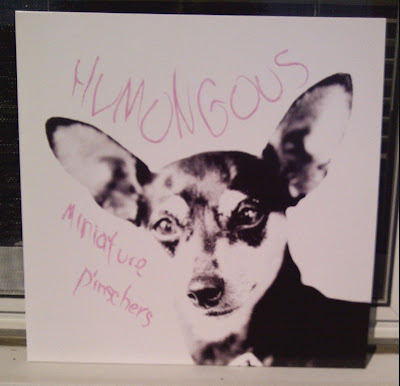 Recorded and Mixed by Dan Willems

listen to "Hook Up the Keyboard":

Ever driven the back roads at ridiculous speeds in a rickety-ass old heap?  You go grinding across gravel roads, like the ones that wind through backwoods everywhere, wheels on the ground but never quite locked up, rocks flying everywhere, always a degree or two off straight ahead, trailing a dust cloud as big as a storm front . . . there's that wingless & wide open feel you get driving on dirt, where precision is belied by response lag, where power and velocity are compressed into the great mean, and the edge is only visible in your rear view mirror . . .

Leave that Ferrari in the garage, Ruben.  Better light 'em up & kick down that Crown Vic, Clem, 'cause once I get off pavement that 4.6 Liter 8 in your Police Interceptor don't mean shit.  All y'all are gonna see out of me is a cloud of dust, & you'll know I'm gone when I stop bouncing gravel off your windshield . . . see, because on dirt & gravel, aerodynamics are worthless, traction is gone, horsepower is worthless: all you need is a stick shift and the nerve to push that rustbucket all the way to the edge and beyond.  A redneck in a rusted-out S-10 can outrun a city slicker in a Dodge Viper; the gal or guy with the most nerve wins.

Good rock -n- roll bands understand this.  Ever since Keith Richards plugged in his first Harmony, the good ones understood that playing rock -n- roll wasn't about precision.  Rock -n- roll is like driving on dirt: whatever boat you're piloting, the point is to get it going as fast and crazy as possible without losing it into the ravine.

Not that Humongous has exactly peeled off the fenders and uncapped the headers.  Their rockism isn't a stance, it's a compulsion, unlike the new macho rock ethos of the tattoo boys & girls.  Humongous has nothing to do with the narcissistic pose:  they only have one self-identifying raver, "Hook Up the Keyboard"; but it's all about nerd swagger, and it doesn't even show up until almost the end of the record, after which it is immediately smoothed out/undercut by the epic "Intervention".  No, they flail away like a bootlegger's Mercury because, as far as they know, that's the way it's done.

Humongous started as a bluegrass band (if you've ever listened to much real bluegrass, you know that the whole dirt driving thing has as much to do with bluegrass as rock), and there's a part of that which still sticks, in spite of the adrenalin-fueled twitch-rock they play now ("twitchcore", if you will).  The nervous energy, the speed ("always play just a little bit faster than you can actually play"), the keening vocals, the off-kilter feel of much of the music, all owe a debt to bluegrass . . . as does a lyrical viewpoint that tells the stories of the locale (though now, of course, the "locale" has been electronically expanded).

Miniature Pinschers starts out with some twitchcore jazz: a nice little cluster of barre chord, & then the guitar sprints off in a jerky scat, followed by the wheezing coronet.  The saga of  "Panty Boy" starts ragged and funky, hits a bridge, and then plunges into darkness and death (that, again, is a touchpoint with bluegrass), with oozing synth and repetitive guitar figure as Jess haltingly tells us precisely how Panty Boy fucked up . . . and so, the blueprint of the album: immediate songs with stereoptic images set to rock that is fast, crazy, and loose, with a ton of insane changes that are like prog rock without the math.  The musical vocabulary ranges far and wide; from almost obsessive lapses into funk, to the C & W of "If P had W" (one of the more charmingly direct statements of female lust you're ever likely to hear), from the straight rave-up of the aforementioned "Hook Up the Keyboard", to the almost Brechtian "Intervention".  There are songs about murder, incest, Czech girl illegals and healthcare, drinking, sex, the cops . . . all the biggies.  And through it all, Humongous sprints along at breathless pace, barely slowing down enough to land the punches.

For music that has the coherence and velocity of a sawed-off shotgun blast, it comes as a bit of a surprise just how unified the dramatic arc of the album is.  It doesn't sound exactly operatic, but you almost get the feel of Miniature Pinschers as a song cycle, where ideas pop up only to quickly disappear, then resurface again mutated & re-contextualized.  Images come in jabs and starts, stark photos with ragged tendons connecting them together . . . the mutant surf spank of guitar chords built from the ground up (how does he keep that low E in tune?) anchors the proceedings . . . the tootling of the coronet bounces between the guitar line and the vocal line . . . the keyboard's bass runs & sparkling chime makes the New Wave argument . . . the chugging splatter of the drums bring the funk  . . . the roiling vocal dialogues between Jess and Matt dislocate the center . . . Humongous manages to take simplicity, throw it on the floor, and smash it to bits; then they rearrange the fragments for maximum nervous overload.  More, they manage to make the schiziod chunks a broken mirror for our schizophrenic culture.

While never repetitive, the songs are all of a piece, with the exception of "Intervention", which is nothing if not operatic.  It's here that the schizo voice of the band shows to the full effect, with Matt and the rest of the band turning on Jess, demanding an intervention ("We've decided we know what's best for you" repetitively delivered in an impossibly hooky sing-song line), while Jess resists, eventually drifting off into nothing ("I'm sailing away, on a sinking boat, I'm getting away, to Miami FLA").  It's as if the twitchy immediacy of the album finally straightens out on "Hook Up the Keyboard", goes all big brother with the voice of "Intervention",  only to dissolve into a hazy abyss of Mai Tais with little umbrellas by the end.  It's Humongous's best song, even if it's the most atypical.  But here, as everywhere else, sparkling pop hooks and chugging punk/funk alike are chopped and twisted, to the same dislocating effect.  And yes, it does drift off in a way that no other Humongous song does, but only because there is nothing left to do.

Humongous does have a sonic connection to the infamous Louisville sound, but by way of the lesser-discussed Ethan Buckler/King Kong branch of the scene . . . indeed, Humongous sounds like you imagine King Kong would if you locked King Kong into a dark room, kept them alive with coffee, Captain Crunch, and benzedrine inhalers, then cut them loose on stage with a bank of strobe lights all going at different speeds . . . and as outsiders, they tend to circulate in crowds that run from experimental (Sapat, The Belgian Waffles!, Sick City Four) to outsider punk songwriters (Brian Barbee/Janitors of the Apocalypse, Furlong).  Ten years from now, Miniature Pinschers will be considered one of the local classics, and the scenesters will be writing a new history to incorporate Humongous.  Why not beat the rush?

Humongous's Miniature Pinschers will be released October 13th at an album release party somewhere or other (update when I get it) at Astro Black/Quills Coffeehouse.  Pick it up at Astro Black Records (in Louisville) and other discerning media dealers.