Any moment, the snow will start to swirl around your window (ok, it's 75 degrees here today, but I'm looking at the calender, not out the window). The holidays are just around the corner, and since you probably work a shitty service industry job, that means as the days get shorter, your hours get longer . . . and, what's more, everyone thinks you're a perfect whipping boy/girl for their own holiday neuroses ("feel slighted and embarrassed because the boss didn't invite you to his Christmas party this year? Take it out on that sap behind the counter!"). What you need is a vacation, and now! Not after the fifteenth of January, you won't get any vacation then either, 'cause your boss is going on vacation first, then there's inventory, then there's those big mandatory work sales they run in the depths of the winter to try to make their first quarter numbers, etc. You need to get away NOW! But of course, you're going nowhere, because you can't quit your job, and even if you could, you couldn't afford to go anywhere. So, here you go - a virtual Mexican vacation!

First, download this photo and set it as the wallpaper on your laptop: 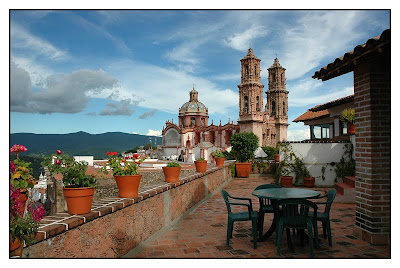 Done? Good. Now charge that sucker up, and head out to your favorite Mexican restaurant. Of course, the food at the average Mexican restaurant has little to do with real Mexican food, but what do you care? You're an American! And besides, there's margaritas! After the third one, you won't even care that the average Mexican has never tasted a margarita, at least not until he/she got to the U.S. As an added bonus, there will be plenty of "Mexican music" caterwauling over the speakers in the restaurant to get you in the mood. You're that much closer to your Mexican paradise! Just don't forget the margaritas!

When you get home (take a cab, for the love of god! How many margaritas have you had, anyway? Three? Four?), by all means continue your virtual Mexican getaway. First, fire up some authentic Mexican music on the Victrola (my choice is a little number called The Roots of the NarcoCorrido on Arhoolie, a nice little collection that provides a scholarly context for the current rage in Mexican music, the NarcoCorrido . . .). Fire up the ol' video machine and load up Treasure of the Sierra Madre (1948), directed by John Huston and starring Humphrey Bogart. Then, pick up a book or two. Start out with Richard Grant's travelogue, God's Middle Finger: Into the Lawless Heart of the Sierra Madre. It is a spellbinding read and, as an added bonus, when you finish you will understand why a virtual vacation is probably preferable to a real one these days.

If one book is good, more are better. Keeping to the same mood, why not roll with Cormac McCarthy's Border Trilogy: All the Pretty Horses, The Crossing, and Cities of the Plain? And, while you're at it, go ahead and tack on McCarthy's addendum to the trilogy, No Country for Old Men. When you finish that then, by all means, roll the Coen brother's movie - though it doesn't add to the novel, the photography has a degenerate glory, and Tommy Lee Jones, Josh Brolin, and especially Javier Bardem are fantastic here. A first rate crime thriller, indeed!

By the time you are done, you will have had a lovely Mexican (Sonoran?) vacation. All from the comforts of your home. And, as a bonus, you haven't had your gringo ass shot or kidnapped! Bonus!

Well, that's it for my virtual Mexican vacation. Of course, not all of Mexico is a narcotraficante's paradise, where life has no meaning and death, sometimes, has a price. There are also the beautiful tourist traps built for the gringos . . . but hey, if you wanted to go to South Beach, then you would have gone there, right? Anyway, for all my Mexico fans out there, lay some comments onto this blog to suggest your own virtual Mexican vacations (Tucson posse, I'm looking at you). Until then . . .
Posted by Bill Zink at 20:40

It's funny you're doing this particular entry - I'm finishing "The Crossing" as we speak. (Wasn't up for his newest "post apocolypse" novel yet) Freaking great read. I wish I was Billy Parnhem.

Yeah, "The Road" was the first one I read (Elijah Pritchett - "I know that it's an Oprah book, but it's actually good."), and it's still my least favorite. Read every other McCormack novel before that one. After you read the Border Trilogy (and "No Country for Old Men", which is not great, but very good - think of it as a top-notch Elmore Leonard), MAKE SURE to read "Blood Meridian" . . . it's also a Southwest novel. Then, move on to "Suttree".

Cormac McCarthy is totally the shit.

Word - Christmas is coming up. I'll probably put some of his books on my wish list.