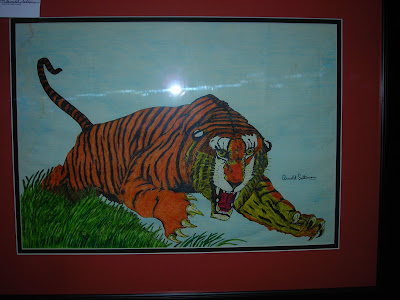 I have, deep inside me, the tendency to be a snob. I understand that about myself, and I take measures to push that part of my personality aside. For the most part, I'm successful . . . just a nice, level headed Midwestern boy.

For the most part, that is.

Along the same lines, I used to be a State Fair hater, but no more. It's not that I have finally, after all these years, joined the irony culture . . . no, although Sharri dragged me there kicking and screaming, I loved it. Next year, I'm all over it. All week. And I can only hope that Joan Jett comes back.

Before I launch into this rant proper, I need to point out that Sharri brought home the tapestry. Fourth place for the J.R. "Bob" Dobbs sweater, third for some socks, and second for a hat/scarf combo. Not bad for her first year. 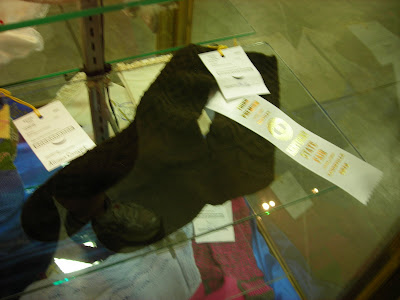 She's already plotting for the blue next year. I'm trying not to get involved, which isn't a problem for knitting, but she's talking doll houses as well. I'll be drafted for that.

And one more shout out for the grand ol' American fairgrounds: 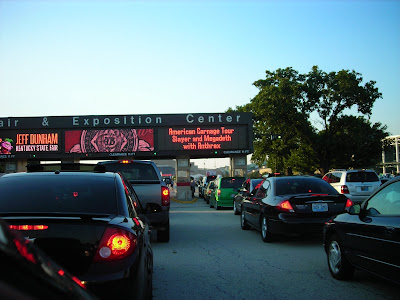 Yes, that's right, the American Carnage Tour, with Slayer, Megadeth, and Anthrax. Like the 80's never died. I am so there.

So we went into the exhibition hall, and went all the way back to check out Sharri's ribbon haul in the knitting exhibition. After checking out the different fabric arts categories, Sharri moved on to the quilting section. As impressive as the quilts were, the section was huge (there are a whole bunch of badass quilters in Kentucky, apparently), and Sharri was much more interested in the craft than I was. So, after a cursory surf through the quilts, I moved on to the art exhibit. Fifteen minutes later, I had to step away because I was laughing so hard that I was starting to attract attention. Yes, the snob had come back out, but I couldn't help it. This shit was killing me. After I caught my breath, I dove back in, this time squeezing off a few rounds with the digital Nikon. I had to move quick so as not to draw too much attention to myself. And, lo! I am going to share my bounty with you, along with appropriately pithy (though understated) commentary, Here are the highlights:

Well, one more caveat before I start: I am not a visual artist. Not because I haven't tried - I took a drawing class in college, and I was horrible. I ended up with a "B" in the class (because of my "theoretical aesthetic edge"), but I have no skills whatsoever. I am not making fun of these people . . . well, I am goofing on their art, but I'm sorry. This shit is just too funny. And no, I can't do better. Okay, actually I probably could do better than a few of these, but that's not the point I'm trying to make. And now, on with the show! 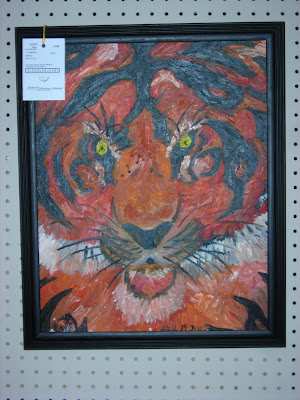 There's something I'm missing here. The jungle cats were HUGE . . . not just in painting, but in needlepoint and other sewing venues as well. Why? I don't get it. Is there something hypnotic about the fierce gaze of the JUNGLE CAT? 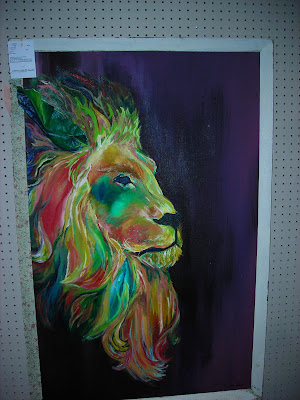 You can't really see it in the photo, but this one had a leaf incorporated into its mane, a grass flower for an eyebrow, and grass blades for its whiskers. Look out people, I've been psychedelicized!!

Which is the cue for the David Gilmour award winner for the painting most banally representing a Pink Floyd influence (from PF's most banal period, of course): 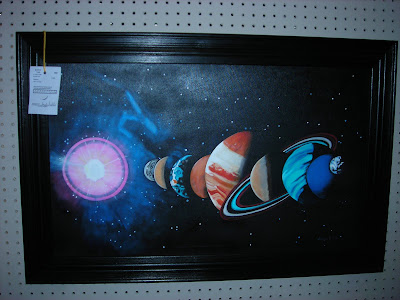 Let's pause to drop some eagles on the proceedings: 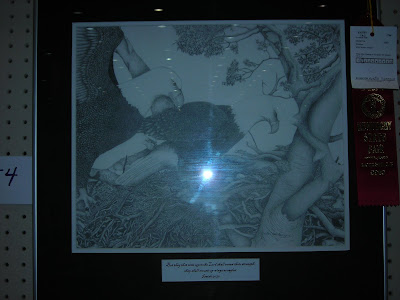 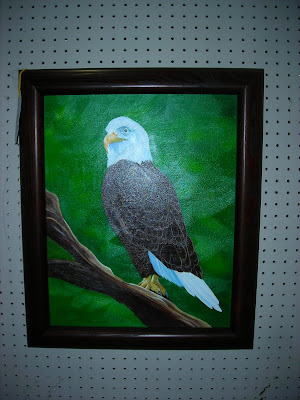 . . . and indeed, that is a red 2nd place ribbon on that top one. Not a great photo (remember, I was shooting these from the hip), but if you blow it up and look close, you can see, along with the crazy detail, weirdly anthropomorphized eagle heads, especially on the one to the left. The other one . . . well, it is what it is. Live the glory.

There were also Lincolns all over the place, though the paucity of photos indicates that they were all reasonably executed, if not exactly spectacular. The true 'mericans in Kin-tucky still love them some Abe . . . it is the birthplace of Lincoln, after all (as opposed to the adolescent home of Abe [Indiana] and the young adult party grounds of the ol' railsplitter [Illinois]). It appears that it will take a couple years for Glenn Beck to ruin Lincoln for the state of Kentucky . . . but mark my words, he will. Even GB doesn't have the audacity to remake/reterritorialize/explain away Honest Abe . . . or does he?

Okay, time to stop being a complete dick. Here's one I like: 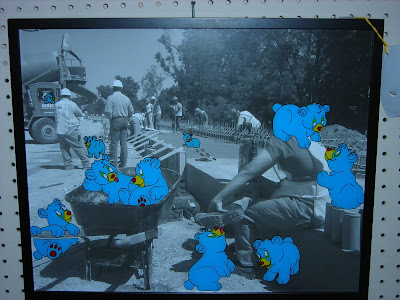 Apparently, what we have here is an old black and white photo with blue bear stickers all over it. Is this bear recognizable to anyone? Is this some cartoon character that I should recognize? Anyway, I really like this one.

Whoops, look out! Another jungle cat! 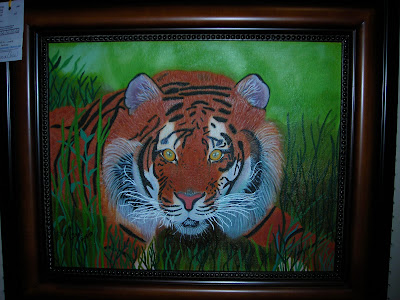 And now, to pinch a phrase from Todd Rundgren*, another of an infinite series from the Ever Popular Torture Artist Effect: 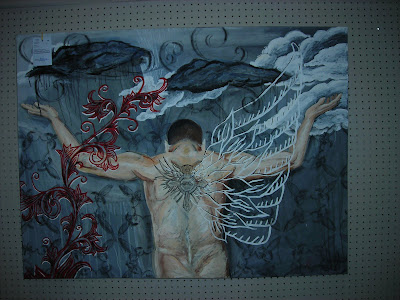 Hey, I kid . . . but at least this one has multiple layers to analyze.

Unlike another example of the EPTAE: 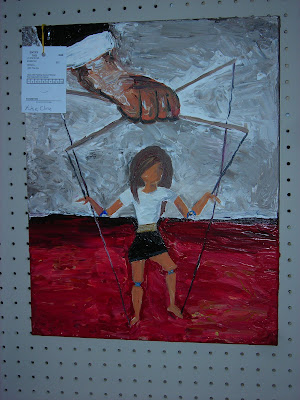 Uhm, I know I'm being an asshole, but can we get much more cliche than the marionette image here? A-and, it's a woman, being controlled by a man? Okay, I'm buying, but can we work just a little bit harder for the images? If you're going to tell me a story, can you tell me one I haven't heard A MILLION FUCKING TIMES? 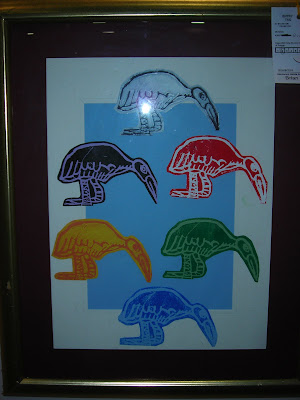 This one was by an eighth grader. There were a few "cutting edge" (fresh for '86) works which explored a connection between commercial art, cartoon art, and minimalist repetition . . . ohh, so postmodern . . . but this is the only one which did it successfully. There is a tension here between the minimalist structure and the rough execution of the dodos - not to mention the oddity of having dodos as a focus - that removes it from the strictly clean "commercial art" theater. The individual dodos, taken as a gesture, are interesting strokes, and the randomly (naive) postmodern whole is an interesting sum of its parts. This isn't the Guernica, for the love of God, but I would hang this on my wall, which is the ultimate test of art, isn't it?

And, well, ladies and gentlemen, Elvis has entered the building: 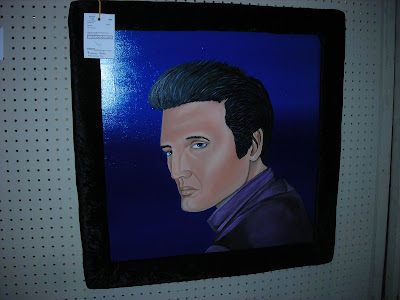 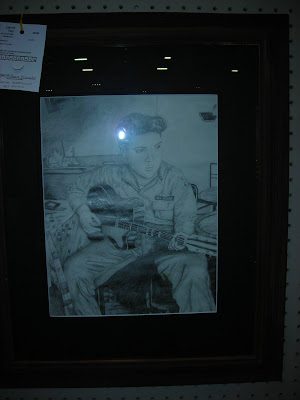 There is a nice move on that first one: a normal painting of Elvis with a black velvet frame! There's only one problem with the painting: it doesn't look like Elvis. And as far as that goes, neither does the second one. Not exactly dumbass bullshit, but FAILS nonetheless. 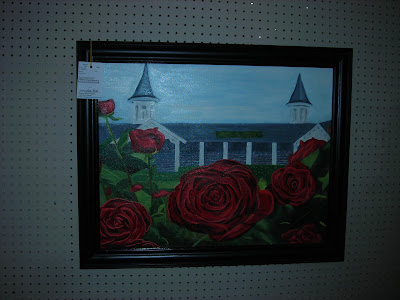 See, 'cause it's got Churchill Downs in the background, and roses foregrounded (clumsily, but who's keeping track?). The Kentucky Derby as the defining element of Kentucky . . . the run for the roses, get it?

Uhm, tell me: why are those giant flowers invading those buildings? 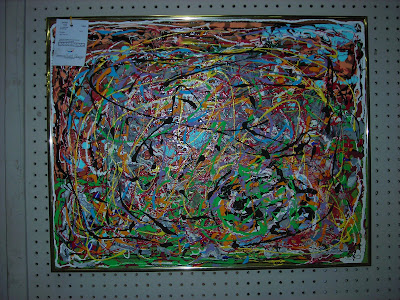 And tell me why someone who would go to the trouble of meticulously imitating a Jackson Pollack would put a brass frame around it? Doesn't that miss the point at a very fundamental level? 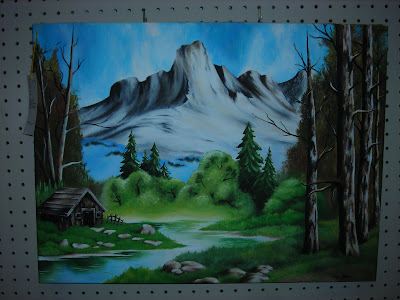 Speaking of the legendary masters, here's our Bob Ross tribute. I like how winter showed up in the middle of the summer to envelop the mountain, but stopped just behind that stand of bushes. So, when you walk out the door of the cabin, is the temperature in the 60's, then you hike back through the trees, and it drops 30 degrees? 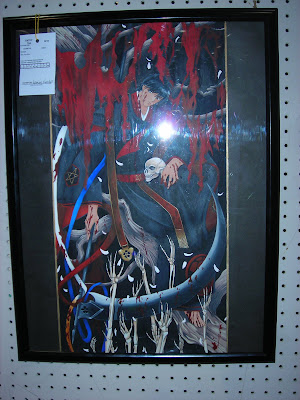 Yow! Bloody Satanic anime, straight from mom's basement! Wish I could have gotten more of the detail on this . . . 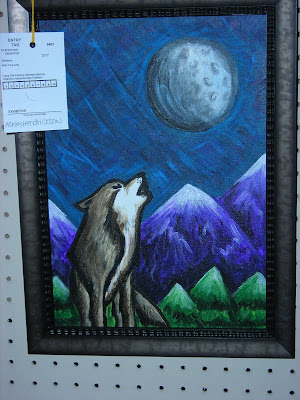 I'm really surprised I didn't see more wolf-inspired art - but maybe that's just a T-shirt thing. I actually kind of like the energy of the stroke and composition on this one, which means it doesn't have the requisite tackiness it takes for me to enjoy a wolf painting.

Now wasn't the most backhanded compliment you ever heard in your life? 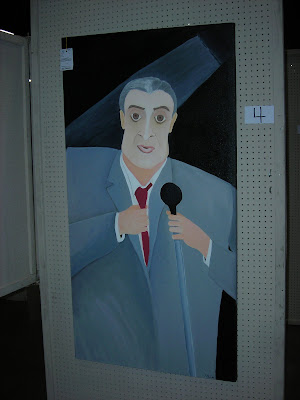 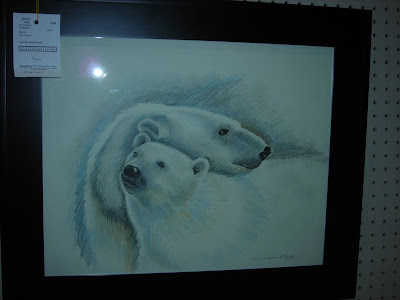 Aw, cute polar bears. Such gentle and loving creatures, those polar bears. I wish I could have me a fuzzy warm polar bear to snuggle up with on those long, cold, arctic Kentucky winter nights (Louisville, land of the midnight sun!).

There were cute animal paintings all over the place. Most of them were dogs . . . many golden retrievers, if memory serves. No dog pictures here - even I have my limits. 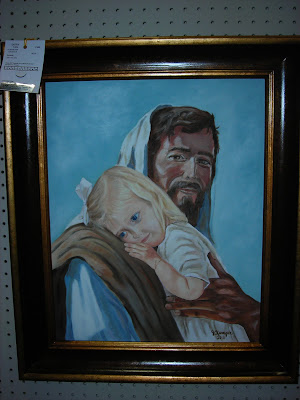 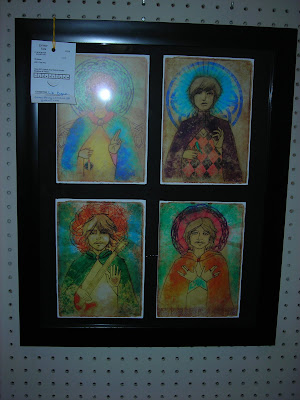 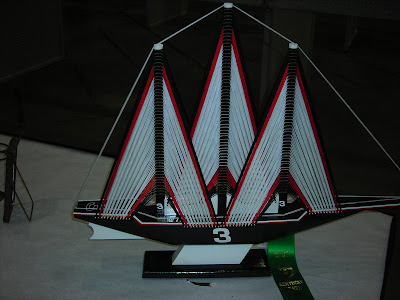 Super-cool Dale Earnhardt boat! S. S. Intimidator! That green ribbon should have been white (at least!). 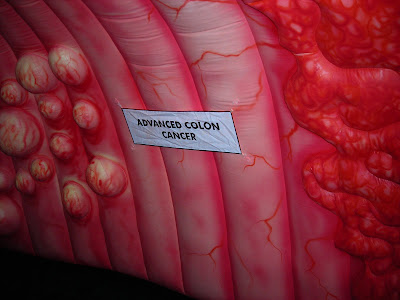 Whoops, not from the art exhibit. This would be the giant walk-through colon. 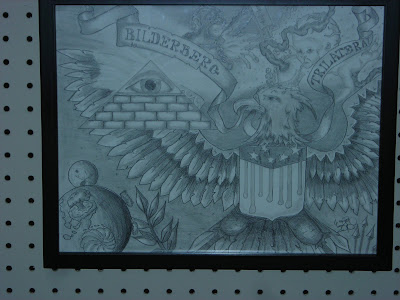 This one is crazy - I wish I had a better picture, because the details here are insane. Starting, of course, with the obligatory eye on the pyramid. The eagle's ribbon reads "Bilderberg" and "Trilateral". Check out the stripes on the shield: they are rivulets of blood! Check out the globe down in the lower left: atomic mushroom cloud explosions all over the world! Up top it gets really bizarre: there is what appears to be a bloated baby with cartoonishly paristaltic umbilical chord and an old man's face, with a giant throbbing brain like a sci-fi/Star Trek monster. To the left there appears to be a sambo (?!) and a giant hypodermic needle. I have no idea what is going on here . . . and I'm not sure I want to.

Well, at least it addresses the world, unlike all those damn cute animal paintings.

As does this gem: 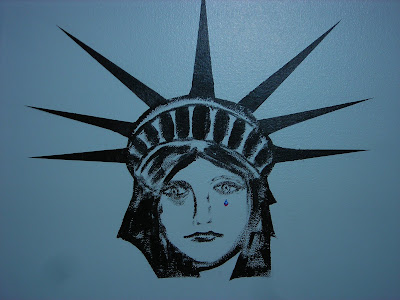 DAMN YOU OBAMA! DAMN YOU TO HELL!!

Well, there you have it, a little slice of Kentucky. To be fair, there was some really beautiful work in the photo realist vein, but pictures wouldn't have done it justice. These were the works that made this exhibition fun for me.

See you out at the fairgrounds next August.

* Soon to be a visiting lecturer at the Indiana University School of Music (Fall 2010)
Posted by Bill Zink at 00:01