Another compendium of half-formed ideas . . . 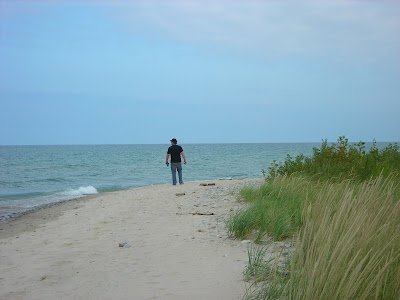 Bonus time up north! Another week of virtually perfect weather up out of the heat. My my!

Nice and quiet this time - just Sharri & I with mom & dad. We spent a little more time cruising the countryside, checking out little places we haven't seen been to before, like Christmas Cove (above), Mission Point, Good Harbor Beach, and a few other places. Dad fired up the party barge and we got most of the way into the southern lake, and at a much more relaxed pace. We also spent a little more time tearing around at full speed in the powerboat. 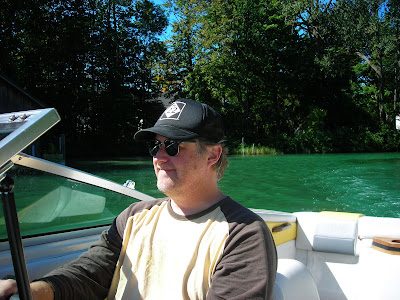 Not as much reading this time, either. I did pick up Ted Morgan's memoir, My Battle of Algiers.

One of these days, I'll spend more time talking about Up North . . . just not right now.

All in all, a nice mellow end to the summer, especially given how annoying August has been. The summer has a whole has been a tad bit more annoying than I would like, which is kinda a drag, since I spend the whole year looking forward to summer. Oh well, onward and upward.

Here's to an exciting fall. 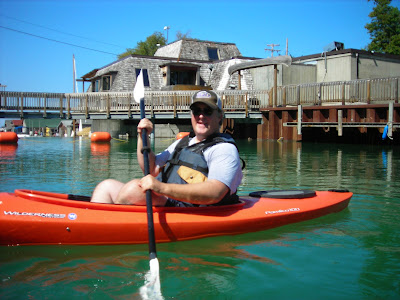 There was a gag order dropped in the Roger Clemens hearings, so we won't be subjected to the annoying media circus as much as we could have been. In the short time that they were allowed to speak, both Clemens and his lawyer made a clear outline of how they were going to run this in the press: it's us against the government. In other words, Clemens wasn't going to try to plead ignorance (a la Barry Bonds), or attack his opponents from his morally superior perch (a la Lance Armstrong), he was going to join the Tea Party in running against Obama.

They want to put Roger Clemens behind bars.

On one level, I do agree with the faithful: we have no business trying Roger Clemens for lying to Congress. Congress had no business wasting their time investigating PEDs in sports. They have much more important things to worry about.

I recently re-read Jack Kerouac's San Francisco Blues. The basic premise is that the series of poems are short bursts ("choruses") of blues, with the final line of one poem leading into the next "chorus". The poems are limited to fitting onto one page of a notebook small enough to fit into Kerouac's pocket.

The poems themselves are a mixed bag, and I have no interest in even approximating Kerouac's voice. I am interested in the notebook schtick, and I like the sharp, jagged rhythms of the best of the blues poems.

I'm going to try to scare up 75 poems or so for next summer. We'll see how that goes.

hotcha! State Fair time in the old town
the natives are out
flashing displaced graphics
and hysterical edge
life during wartime's perpetual state

one dimensional
eyes of jungle cats
"look, she's gonna pop right fuckin' here!"
off to the side
rivers & tributaries
gently swirling backwaters
there's a pickaninny in that case, over there
Kentucky detritus collecting in puddles
& eddies off to the side
filtering into the rivers
throbbing thick blood behind the temples
anger just below the
hysterical above

who knows
what runs in the clear pines
"Take to the mountains," he said,
"if the government is a problem.
Make them come get you
& then shoot down on them
from high rocks."
not the same, perhaps
but mixed oak, maple, birch
pine
provide cover

white nation, white nation
curtain drawn, it's here
it's down the street
"no one gets my gun"

Once again, effing Blogger wipes out all my typographical stunts, so you'll have to wait until it gets published to see the final versions. [UPDATE: the new Blogger editor allows different kinds of indents, so the poems above are in their actual forms]

And by the way, did you know Indianapolis Colts owner Jim Irsay also owns the original scroll from Kerouac's On the Road? Gotta love Wikipedia.

Oh, and more on the state fair in an upcoming post.

The Reds? Are You Kidding Me?

Well, my Tigers drained all the drama out of the AL Central by collapsing around All Star break instead of at the end of the season. They're playing okay baseball right now, but at ten back, they're not catching the Twins because, unlike the Tigers last year, the Twins won't fold. For the record, I don't see the Sox catching the Twins either, Manny or not.

But, what's this? The Reds in first place? Sure didn't see that coming.

As they say, stay tuned. I would love to see the Reds deep into the post season.

If you are sleeping on the world basketball championships, wake up. "America's B Team" is playing some of the most fun basketball you're going to see for quite a while.

Basketball traditionally breaks down its starting five into specialized roles, and anyone who recruits an all-star team generally defines the roles, and then finds the best players to fill those roles. This version of the US National team went with the best players, regardless of position. As a result, it's a team full of guards and small forwards, with Tyson Chandler and Kevin Love being the only big men on the team. As a result, you've got Lamar Odom, normally a 2-3 even though he's 6' 10", playing center, as well as Andre Iguodala, Rudy Gay, and Danny Granger, all muscular 2-3's, playing power forward.

I see the mark of Kryzewski on this team: he's trying to really establish himself as a basketball genius, not just a motivator of young men. He's trying to go to the logical extension of the Bob Knight defense-first school, pumped up Nolan Richardson-style. This is an amazing chance to see just how exciting defense can be.

It's too bad that Rajon Rondo didn't work out for this team, but if you turn the rock over and can't hit jumpers, the international game punishes you even more than the American game does. On the other hand, I'm glad they gave Eric Gordon a chance, because his inside/outside game goes well internationally, and his lack of a mid-range game doesn't get exposed like it occasionally does stateside. Kevin Love also does well in this set up, since he's more than happy to mix it up physically with anyone you can throw at him.

Overall, the defense is breathtaking, but the offense will make or break this team. They are currently undefeated, but now they're playing for real in the one-and-done round. Catch it if you can.

So, I'm thinking of creating an animal metaphor to represent my truly enviable attributes to the world at large. Let's see, I could be a strong, soaring eagle, or a powerful bear, or a graceful deer. I could be a sage owl, a proud lion, a faithful hound, or an inscrutable cat. I could be a showy peacock, a bizarre giraffe, a timeless elephant. I could be a slimy lizard, an indestructible cockroach. Or I could be a starfish.

To be fair, the Tea Party didn't choose this metaphor for themselves. It comes from a book written by Rod Beckstrom called The Starfish and the Spider. The idea, in short, is that decentralized organizations are stronger because you can't kill them by cutting off the head - hence, the spider v. the starfish metaphor. This idea could probably as easily applied to Al Qaeda . . . and it does make sense.

You can follow the metaphor out to its logical conclusion. A starfish is capable of surviving and regenerating lost limbs, which makes it a uniquely durable organism. But if these "decentralized" organisms have superior survival characteristics, then why hasn't evolution determined that more of these types of organisms would end up higher on the evolutionary ladder? It seems that maybe nature prefers centralized biological systems after all.

Not trying to make a specific political point here, just pointing out the obvious.

That would be the representative of Kentucky's fourth, Geoff Davis.

'Cause, you know, if it weren't for all that paperwork, these people would be out there pulling jobs out of their asses.

So, this is old news, but I've been avoiding talking about the Chamber of Commerce because they make me crazy.

What's with this "crisis of confidence" bullshit anyway?

There has been a lot of chatter in the news about how the recovery has not translated into more jobs. The Chamber of Commerce essentially says that business owners are sitting on their money because of a "crisis of confidence" . . . which, of course, they explicitly blame on the Obama administration.

There are obvious alliances between NGOs and political parties - unions and Democrats, the Chamber and Republicans. Ostensibly these NGOs will align with the party that will do them the most good, and it is understandable that they would be semi-permanent alignments given the philosophical underpinnings of the parties. Of course, these NGOs will campaign for the political parties that they are aligned with. Maybe I'm projecting here, but it seems to me that the Chamber has become more of an advocacy group for Republicans than an advocacy group for businessmen. Unions always seem to work for the best interests of their constituents, and to the degree that those interests are addressed by Democrats, unions work for Democrats. The Chamber seems to be working for the best interests of Republicans, and to the degree that those interests match the interests of businessmen, The Chamber works for businessmen. That may seem to be a subtle distinction, but it's not. The fact that their stated primary purpose is actually a secondary purpose makes them untrustworthy. Sort of like Fox News, if you know what I mean.

And besides, the real businessmen know that the best time to make your move is when your competition is suffering a "crisis of confidence".

That's it for now. I'll do the Kentucky State Fair art post next.
Posted by Bill Zink at 18:00

Much is made up north about that fact that their vineyards are on the 45th parallel; the same parallel as some of the greatest vineyards of Europe. I'd also point out that the 45th parallel is the DMZ between North and South Korea. You can draw whatever, if any, conclusions you want from this observation.