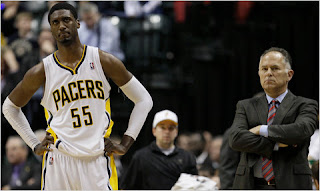 It been fun "reading" Kobe Bryant lately - he has become such a master of saying things without saying things.  For instance, when Jerry West called his Lakers "old" and critiqued their defense, implying that it wasn't getting any better, Kobe's measured response described how the Lakers had a complex team defense in which each player depended on the other, but not before he quietly declaimed "We're ranked like, what, third in the league in defense?".  Translated: "Shut the fuck up, old man, and just do your job.  We're doing ours."

Similarly, when asked if the Pacers were a playoff team after they came into the Staples Center and punched the champs in the mouth back on November 28, Bryant replied "Definitely."  Translated: "Okay, now you have my attention.  I will not overlook you again.  Enjoy your moment in the sun, and look forward to the life of bitter pain you will be living for the foreseeable future."  Indeed, a mere two-and-a-half weeks later, the Lakers came to Conseco and returned the favor 109-94.

And now, we are staring at a 5-15 record over the last twenty games.  Not good.

Back in November, not long after my first Pacers post, the Pacers had beaten the Lakers and the Heat and had given OKC all they could handle.  Only the Jazz (during their hot streak) kicked the Pacers to the curb like the old days.  There was speculation that Indy had turned a corner anchored by the surprising rise of Roy Hibbert.  Now, all that is gone.  Hibbert has disappeared, the team is once again in disarray.  Is this the same old Pacers, too crappy to make the playoffs, not quite crappy enough to climb up to the top of the draft lottery?

The main problem, as alluded to above, is that other teams started to take notice of Hibbert and the Pacers, and both shriveled in the heat of the spotlight.  The Pacers-as-spunky-underdogs could hang with teams who were taking it easy (the Pacers representing the next best thing to a break in their schedule) and maybe steal one at the end.  If they didn't, "well, at least they played them close".  But when they took out the Lakers and the Heat early on, and generally started to look like a team that was on the verge of getting it together, teams stopped taking the night off.  And, lo and behold, the Pacers can't step up and trade punches with good teams that are now paying attention . . . so, back to the bottom of the pack the P drift.

And then, there's Jim O'Brien's odd rotation (discussed with insight and detail, as always, at 8 Points 9 Seconds): with the exception of Danny Granger and Darren Collison, no one knows what his role on the team is supposed to be.  It gets tough to prepare, mentally and otherwise, if you have no idea what you are preparing for.

O'Brien's excuse for the inconsistent rotation is simple: if the guy gets it, he plays.  If he doesn't, he sits.  There is a certain Darwinian logic to that, I suppose, but on a young team short on talent it's not the kind of atmosphere that breeds confidence . . . in fact, I think it's becoming clear that, as much as no longer being taken lightly by opponents, the P's recent issues stem from a crisis of confidence.

So, what do you do?  O'Brien's methods are obviously counterproductive over the short run, and if things don't stabilize soon, then the Pacers can kiss the playoffs goodbye yet again.  The logical course would be to just pick a rotation and ride it as far as it can take you - which, we all know, won't be any further than the first round of the playoffs at the absolute maximum - or just trash one more year auditioning players for next year's big money makeover.  The problem is, trashing yet another year is not an option; it seems that O'Brien best have his rotation set within the next couple weeks at the latest.  Will that actually happen?  I'm afraid it doesn't look likely.

The Pacers are a small-market team horribly devoid of talent.  The reason they are in this place is that they gambled and lost back in the early aughts, and it is only in this off-season that they will finally be out from under the onus of that gamble.  I still harbor a small hope that there are enough spare parts to build a top notch team around one big-time free agent acquisition, but that in itself becomes a problem: what elite player can you get that, all other things being equal (money, championship opportunity, etc.), would actually choose to live in Indianapolis as opposed to, say, Chicago, South Beach, New York, LA, Boston, or even Denver, Portland, New Orleans, or Charlotte?  The Pacers need one really big-time baller on the level of the LBJ's and D Wades and Kobes of the world.  A Howard, D Will, Stoudemire, Durant, Anthony, Griffin or someone of that ilk is what is needed . . . and yes, the Heat aside, I think that one big-time player is all that is needed, because Granger could be back at his all-star level if he is no longer the number one option for the team (as I said before: great as Robin, not so hot as Batman).

But, until then, the Pacers need to improve enough to at least see the path to a championship, even if the free agent market ultimately doesn't pay off for them.  At this point, the Pacers remain so far down they can't see up.  The blue sky has just clouded over.

That'll teach me to write about basketball before Christmas.
Posted by Bill Zink at 02:34

ya cockeyed optimist ya!
I guess that's part of being a fan. At least we'll never have to worry about the Pacers being social slumming scenes like Cubs' games. Who wants to hang out in downtown Indy?

Whoops! Jim O'Brien out. The scuttlebut seemed to have him hanging around until the end of the season, but there's really no point in keeping him around. He seemed intent on self-sabotage.