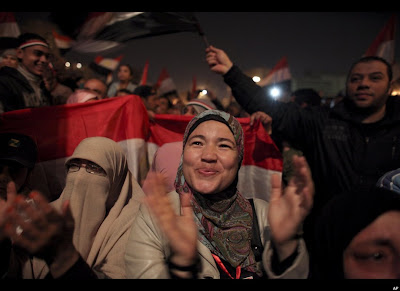 Knowing that the time had come was the easy part for the Tunisians and the Egyptians.  The time had long passed; it was just waiting for opportunity, for critical mass.  They had seen the crackdowns in Iran, they didn't want a repeat . . . but when the rumble started in Tunisia, it wasn't going to be stopped.  Yesterday, Tunisia and Egypt, today Angola, Iran, and Libya, tomorrow . . . Saudi Arabia? Afghanistan?  Outside of Israel, is anybody safe?

Sometimes knowing is the easy part.  When things are fucked up, and I mean really fucked up (keep it to yerself, teapartier!), start throwing rocks.  Of course, when the knowing is the easy part, the doing is the hard part, 'cause that means the bosses really have things on lockdown . . . it's a perverted equilibrium: when one thing's easy, the other is hard.  Equilibrium is a funny thing.  Funny, except nobody's laughing.

But, to speak practically and as a citizen, unlike those who call themselves no-government men, I ask for, not at once no government, but at once a better government.  Let every man make known what kind of government would command his respect, and that will be one step toward obtaining it.  -- Henry David Thoreau, "On the Duty of Civil Disobedience"*

Sometime, somewhere, you will hear some right-wing pseudo-intellectual start dropping lines from Thoreau to buttress his angst.  Or someone from the talk-show left, for that matter.  Do yourself a favor: read the essay, know the essay.  Don't be lied to.


Government is at best an expedient; but most governments are usually, and all governments are sometimes, inexpedient.  [.   .   .]  The government itself, which is the only mode which the people have chosen to execute their will, is equally liable to be abused and perverted before the people can act through it.

It is clear, in the great wide open of the rise of America, that the government (for Thoreau, anyway) is primarily an impediment.

But where exactly does this anti-government impulse originate with Thoreau?  In a word, conscience.  Thoreau believes it is impossible for a government to have a conscience:


After all, the practical reason why, when the power is once in the hands of the people, a majority are permitted, and for a long period of time continue, to rule, is not because they are most likely to be right, nor because this seems fairest to the minority, but because they are physically the strongest.  But a government in which the majority rule in all cases cannot be based on justice, even as far as men understand it  Can there not be a government in which majorities do not virtually decide right and wrong, but conscience? -- in which majorities decide only those questions to which the rule of expediency is applicable?  Must the citizen ever for a moment, or in the least degree, resign his conscience to the legislator?  Why has every man a conscience, then?  I think that we should be men first, and subjects afterward.  It is not desirable to cultivate a respect for the law, so much as for the right.  The only obligation which I have a right to assume, is to do at any time what I think right.

And, of course, conscience implies justice: for Thoreau, would-be godfather of the Tea Party, is not establishing his rights as an individual because he thinks taxes are too high**.  He has as the subtext to his entire anti-government tract a deep revulsion to slavery and the Mexican-American war, and this is the very key to the transcendent legitimacy of his rebellion.  Indeed, Thoreau-as-rugged-individualist is much more worried about the collective good than his own rights and comforts.  That is why Thoreau speaks of the DUTY of civil disobedience: it is the duty of free humans to live by their consciences.  This alone separates him from many modern champions of "rights", both liberal and conservative.

There's another thread that needs to be pulled out of the quote above: Thoreau does not equate majority opinion with greater good.  As a matter of fact, civil disobedience has, at its core, the individual conscience's stand against the tyranny of the majority.  It is the state that robs its subjects of their humanity ("The mass of men serve the state thus, not as men mainly, but as machines, with their bodies.  [. . .]   In most cases there is no free exercise whatever of the judgement or the moral sense . . . ") and distances them from their own values.  Civil disobedience is the individual's last beachhead against against the amorality of the state.

Not that Thoreau would have us all up in other people's moral business:


It is not a man's duty, as a matter of course, to devote himself to the eradication of any, even the most enormous wrong; he may still properly have other concerns engage him; but it is his duty, at least, to wash his hands of it, and, if he gives it no thought longer, not to give it practically his support.

We can't eliminate all the overt wrongs of the world, much less coerce our fellows into the life that we believe is just.  It is not even necessarily our duty to eliminate wrong.  What is our duty, however, is to make sure that we don't materially support a wrong, even if we do not actively work against it.

At the end of the day, Thoreau's concerns are moral ones, and not in the petty sense of good behavior/bad behavior that so many so easily get caught up in; but rather in the grander sense of good for all men.  Like Marx, Thoreau has at the core of his doctrines a utopian vision for all of humanity, though Thoreau's is clearly of a different kind:


I please myself imagining a State at last which can be just to all men and to treat the individual with respect as a neighbor; which even would not think it inconsistent with its own repose, if a few were to live aloof from it, not meddling with it, nor embraced by it, who fulfilled all the duties of neighbors and fellow-men.


Practically speaking, the opponents to a reform in Massachusetts are not a hundred thousand politicians at the South, but a hundred thousand merchants and farmers here, who are more interested in commerce and agriculture than they are in humanity, and are not prepared to do justice to the slave and to Mexico, cost what it may.***  I quarrel not with far-off foes, but those who, near at home, co-operate with, and do the bidding of those far away, and without whom the latter would be harmless.

Thoreau focused his considerable rhetorical skill on a United States government that allowed slavery and an imperialist war against Mexico . . . but it's not just about government, or even capitulation to the government, is it?  To put it another way, the Gaddafis and Mubaraks are clear targets, but are they the only targets?
____________________
*  Sorry, no page numbers.  I'm working with a twenty-year-old Signet Classics paperback edition of Walden with "Civil Disobedience" thrown in like a bonus track.  I'm guessing there is no correspondence with the pagination of any current editions of Walden.
** Though Thoreau was jailed for not paying his taxes, paying taxes was not the issue he was protesting, but rather he was rebelling against the actions of the government that his taxes supported: "I have never declined paying the highway tax, because I am as desirous of being a good neighbor as I am of being a bad subject [. . .] It is for no particular item in the tax bill that I refuse to pay it.  I simply wish to refuse allegiance to the State, to withdraw and stand aloof from it effectually."  Elsewhere, he cites the bible passage where Jesus looks at a coin and, seeing Caesar's image on the coin, encourages his followers to "render therefore that which is Caesar's unto Caesar".  Expanding on the theme, Thoreau makes it clear that whoever becomes rich in the currency of the kingdom owes the kingdom its tribute (i.e., taxes).
*** By the way: shame on those who decried the overthrow of Mubarak (while admitting that he was a tyrant) because it "wasn't in our best interests".  They are the lowest form of politicians/commentators/idiots.
Posted by Bill Zink at 00:59

This is exactly the kind of thing which resists sound bites & parsing. More people need to read & comprehend. It might be too much to ask.