I wasn't going to write anything more about this year's NBA season, but it was so swell, I couldn't help it.  Plus, there seems to be an overload of dumbass narrative associated with the season, so it can't hurt to add some perspective outside of the 24 hour yak machine in Bristol.  And yes, I know it's really late, but that's what happens when you try to keep three blogs, two musical projects, and a 45-hour-a-week day (and night and weekend) job.


Everyone, even the Heat's biggest critics, still have them winning a ring or three in the upcoming years, and I think that's about right, given the current state of the game.  We can't, however, count on the current state of the game.  Too many franchises are currently loosing money, and unless things are turned around, there will be a contraction in the league.  Plus, I don't really see the owners looking past the sort of free-agent team building exercises that the Heat indulged in this year . . . though, if they did, that would probably be the biggest threat to a Heat dynasty (if Chris Paul ends up in New York or LA, all bets are off).
Meanwhile, the small market teams are in danger.  Oklahoma City caught lightning in a bottle (or rather, Seattle did, then promptly lost the team), but they will only last as long as they can hold on to those young contracts.  Indiana, the one ABA franchise that made money, has been struggling since the Malice at the Palace, and even though they had a strong finish to this year and a bunch of money to spend next year, they still hold out little hope of getting the players that will make them a real threat for the title.  Even the Mavericks are losing money, though only as much as Mark Cuban is willing to lose.
The next CBA will determine the future of the sport.  Here's hoping that one of the best NBA seasons that I can remember will help get everybody on the same page and pulling in the same direction.  This isn't the same as football, where the players are on the short end of the stick and there is a ton of money to be spread around, if only nobody gets too greedy.  Basketball needs both the owners and the players to team up and decide how this game can be run without bankrupting many of the people who put their fortunes on the line for our entertainment, and yet still not holding down the people who actually make this money for the owners. It's going to be a tough fall. 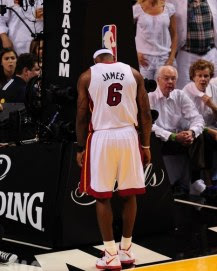