THEY HAVE FUCKING NAMES! 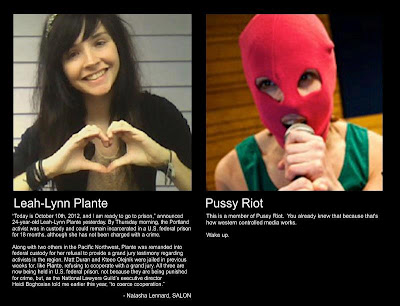 [UPDATE: This post has been edited for style (it was one hot mess when first posted).  The content remains essentially the same.  If you want to see the original version, it is up at notes toward everything, just so you know that the post still says the same thing, only it no longer runs in circles.]


“Today is October 10th, 2012, and I am ready to go to prison,”announced 24-year-old Leah-Lynn Plante yesterday. By Thursday morning, the Portland activist was in custody and could remain incarcerated in a U.S. federal prison for 18 months, although she has not been charged with a crime.
Along with two others in the Pacific Northwest, Plante was remanded into federal custody for her refusal to provide a grand jury testimony regarding activists in the region. Matt Duran and Kteeo Olejnik were jailed in previous weeks for, like Plante, refusing to cooperate with a grand jury. All three are now being held in U.S. federal prison, not because they are being punished for crime, but, as the National Lawyers Guild’s executive director Heidi Boghosian told me earlier this year, “to coerce cooperation.”  -- Natasha Lennard, SALON
Pussy Riot
This is a member of Pussy Riot.  You already knew that because that's how western controlled media works.
Wake up.

Another bullshit meme.
Western media did indeed create "Pussy Riot" in the sense it functions above.  It did violence to the real legacy, the real location of oppression that is Pussy Riot.  This meme does exactly the same thing.  It is naive, stupid, and ridiculous.

In the process, both Leah-Lynn Plante and Pussy Riot (Nadezhda Tolokonnikova, Maria Alyokhina, Yekaterina Samutsevich) are demoted from true locations of oppression to mere symbols of exchange.  In other words, BOTH are dehumanized.