The Trace of Jon Rans, and the Defiance We Owe Him

Jon Rans passed away November 18th, 2012.  Of course, I meant to do this much closer to the event, but when do I ever finish anything in a timely manner? 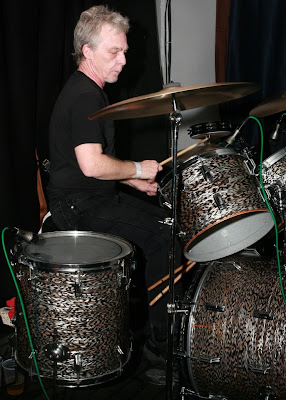 Lately, the bookshelf stereo in my kitchen has functioned like one of those bulletin board nexus points.  I spend a fair amount of time in my kitchen at home, and the stereo is always booming away as I work.  Stacks of CDs and cassettes have sprouted up around it, always in constant rotation, always spilling all over the place.  In early March of 2010, downloaded copies of 70's Alex Chilton albums burned to CD made it to the stack of burned CDs by the stereo, along with my cassette of an '84 show he did in Bloomington.  Then, in the midst of my Chilton binge, I received news that Chilton had died.  I got a little chill, like someone walked over my own grave . . . those CDs, that tape, became the tattered trace of someone moving on.

In December of 2010, Don Vliet, a.k.a Captain Beefheart, passed away.  Of course there was a Beefheart CD in the player when I heard, but I always have Beefheart in rotation, so I didn't make the connection there.

Last April, Paul's Boutique and a handful of Beastie Boys singles from the Check Your Head era found their way into the cassette stacks for the first time in years; and (you guessed it) Adam Yauch passed about a week later.

This past November, while doing something resembling deep cleaning on the kitchen (really all that means is that I did the windows), Latent Chaos tapes showed up in the stacks.  And then, I found out about the death of Jon Rans.

Another trace left on the board.

In a related note, Dan Willems has expressly forbid me from playing Sick City Four in the kitchen anymore.

We are always so quick to name ourselves, sometimes more out of a sense of preservation than anything else.  We want to identify with a group, we want the protection of a clique.  So people ask us: what are you?  And we always seem to have an answer.

I don't know how Jon answered that question, but he could have answered it many ways.  He owned a record store (Repeat Performance) and co-owned a club (along with Jeff Weiss, the No Bar and Grill) that was the center of a small but very vital Muncie scene in the 80's.  He was a booker and a promoter.  He was a drummer for garage revivalists The Mystic Groovies and Hoosier avant krautrock noise pioneers Latent Chaos.  He played drums for anyone around who needed a drummer.  He made money restoring and writing about pottery.  He was a father, husband, and probably many other things in a private live I never accessed.  He was so many different things . . . if I had to guess, his answer to the question was "Whatever the fuck I want to be", because that pretty much sums it up.

I met Jon Rans through Tony Woollard.  Tony and I were both from the Muncie area (Anderson for me, New Castle for Tony), but the Muncie scene hadn't started to bubble up when I left Anderson in '79.  Tony and I were in Bloomington and in a band together in '86, and I met Jon when we went up to play the No Bar.

The No Bar was home for a bunch of artistic misfits, and the personality of the place was largely Jon Rans's personality: a sort of base-level, no-shit attitude about doing something to escape the gray oppression of the Midwestern American landscape.  They weren't a pretentious bunch, but neither did they make the mistake of avoiding anything for fear of being called pretentious.  Eccentricity was not a lifestyle choice, but rather a response to a situation, and it was never held against anybody.  They took you as you were, not as they thought you should be.  If you were ever at the No Bar and saw (what you considered to be) an uncool or bullshit band/act up on the stage, you best keep it to yourself, because the first snide comment you dared utter, about five No Bar regulars would turn on you in unison and shout you down: "Well, at least they're up there fucking doing something.  What's your excuse?"  That was the voice of Jon Rans, no matter who was mouthing the words.  That was the ethos of the place: do something.  Take control.  Break through the oppression of the normal.  And that, too, is the legacy of Jon Rans.

There are a lot of people who figure into a musician's deal: there are the artists you idolize up from afar, the musicians you get to know and admire up close.  There are the scene masters, the people who create an atmosphere to do your thing.  There is the audience (who are treated not as "fans", but as a peer group, again per the No Bar ethos), the people around to give you feedback, the people who test your ideas.  There are the people who help you get your deal to a larger world, either by booking/managing your band or releasing your music to the world at large.  Jon Rans (again, along with Jeff Weiss) was all of these things to me.  I started out as a Latent Chaos fan when those avant-weirdos seemed distant to me, I stayed a Latent Chaos fan when I stood in an audience with a handful of people mere feet away from them.  I got to go onstage with them at the No Bar to lay down sheets of guitar noise for an unruly version of "Golden Moments", a memory I find touching to this day.  And beyond all that, there were the (all too rare!) times when Tony and I showed up at the shop, or hung out with him at Second Story at a Mystic Groovies gig, just to shoot the shit.

I'm not going to pretend that I knew Jon well, because I didn't.  That perhaps makes it all the more remarkable that I always felt like I did know him well whenever I was around him.  He was that type of guy.

I'm not going to be the one that tells you stories about Jon being in a better place, or Jon looking down beatifically upon those of us left behind.  I'm not going to tell you that Jon is still with us like some ethereal phantom that wafts in and out of the physical world.  I don't have time for such fairy tales.  But before he gets lost in the cultural detritus, before he descends into the scrap heap of history, I will tell you that he lives.  He lives in those who bought into his ethos, he lives for those who modeled parts of their lives around his example.  He lives for those of us left who refuse to knuckle under to the narratives presented to us for our lives, who continue to fly in the face of whatever odds there are to do what it is we do, to do SOMETHING.  Jon Rans lives through me, and everyone else who he touched . . . and he will continue to live at least until they pry my guitar from my cold, dead hands.  It is that defiance, in the end, that I feel I owe Jon.