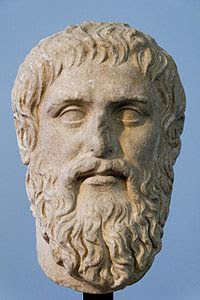 "Then shall I explain first how timocracy changes into oligarchy?"
"Yes."
"Yet a blind man could see that," I said.
"How?"
"That storehouse full of gold," said I, "which every man has, destroys such a constitution.  First they invent ways of spending for themselves, and neither they nor their wives obey the laws, but they pervert them to support this."
"That is likely," said he.
"After that," I said, "they observe each other and rival each other, and make the whole body of the people like themselves."
"Quite likely."
"By and by, then," said I, "they push ahead with their moneymaking, and the more they value money the less they value virtue; in truth, we may imagine riches and virtue as always balanced in scales against each other."
"Just so," said he.
"And when riches are honored in a city, virtue and the good people are less honored than the rich."
"That is clear."
"Now what is honored anywhere is practiced, and what is dishonored is neglected."
"Just so."
"Thus in the end they have become lovers of money and moneymaking and no longer aim at honor and ambition; they praise the rich man and admire him and bring him into places of government, and the poor man they dishonor."
"Certainly."
"So then they lay down a law of limitation in the constitution; they fix a sum of money, greater or less, according as the oligarchy is more or less complete, and proclaim that no one may share in the government unless his property comes up to the assessment.  This they carry out by force of arms, or they have used terror before this to establish such a constitution. Don't you think so?"
"Yes, I do."
"Then that is how it is established, more or less."

" . . . in truth, we may imagine riches and virtue as always balanced in scales against each other."
Posted by Bill Zink at 01:12

Labels: oligarchy, Plato, politics, the poor, The Republic, the rich